If you like my work, consider supporting me through my Ko-fi!

There have been unique visitors and a total of hits.

Hello! This is Grackle's Place, a passion project of mine that got a little out of control. It first began as a site for trans resources, and which I quickly lost focus of in favor of using it as a place to stash and organize any historical LGBTI content I could find. Some sections may be sparse, often due to their specificity. If you have any contributions to offer I would certainly be open to seeing them. You can contact me at grackleweb@gmail.com.

You can access archive pages by following the blue links in the left column, or if you're on mobile, the blue links directly below these paragraphs. They're sorted by subject, although it can become complicated, because "contradictory" labels aren't always as contradictory as they seem, especially in the previous century.

The majority of the older trans-related links will mention crossdressers, transvestites, impersonators, mimics, drag queens and kings, sissies, and more. Many of the gender terms and categories we have now didn't exist, at least not in their modern form. For example, a newsletter may be named "Cross Dressers International", but contain advice on social and medical transition, a path we now typically associate with a more recent label, transgender. To add another layer to the situation, the word transgender was originally often used to include crossdressing and gender non-conformity, although now many people associate it with being a transsexual, or at least a distinct entity from gender non-conformity.

The site just underwent a major remodel, so some links may not work and some pages may be barren. Bear with me as I get things in working order. The hack job of coding on the other one was becoming a beast to handle.

Archive Pick of the Month 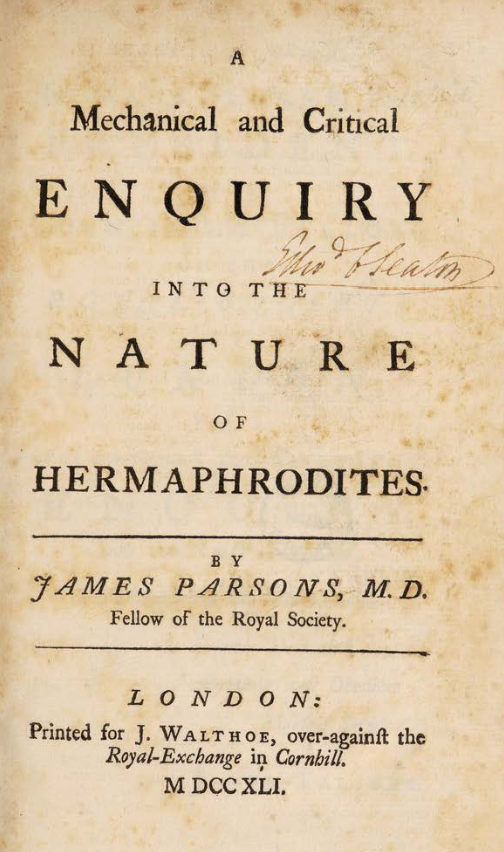 A Mechanical and Critical Enquiry Into the Nature of Hermaphrodites by James Parson M.D. FRS (1741)